HDT are celebrating the recent completion of a major project to restore and install a Signal Box at Irlam Station. The magnificent and historical Signal Box now stands proud at the station and is the latest addition to the heritage attractions visitors can see and enjoy there.

Unfortunately, due to the Covid-19 pandemic, tours of the Signal Box have had to be postponed for the time being. Once the current situation and restrictions are lifted, guided tours will be on offer. Meanwhile to see a taster of what the Signal Box tour can offer, click on the following virtual tour link https://youtu.be/AgPrahdKFr0

Built in 1884, the Signal Box is the oldest surviving Midland 2A box in the UK and is a grade 2 listed building. Its 32 levers once controlled the junction between the Leeds main line and the Oxenhope (Worth Valley) branch line. When the line through Keighley was electrified in 1994 the Signal Box was moved 100 metres to the maintenance yard, where it lay deteriorating for 25 years. 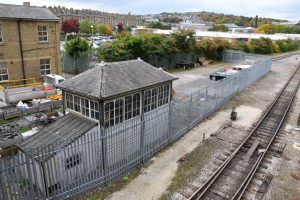 Having once had a Signal Box very similar in size and design to the Keighley one, it was felt that Irlam would make the ideal home to secure its survival as a heritage piece, especially as it would stand perfectly alongside the beautifully restored Station House. 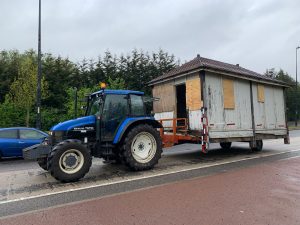 In 2018 the Railway Heritage Trust obtained the Signal Box from Network Rail for the Hamilton Davies Trust (HDT). After gaining permission from Bradford City Council, Network Rail then arranged to have it transported to Irlam on 4th April 2019 to be restored and placed at Irlam Station. 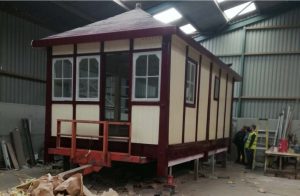 Restoring the Signal Box has proved to be a labour of love, with great care and attention shown when dismantling and repairing it in order to respectfully bring it back to its former glory. This unique undertaking was managed by local company NC Developments, with the help and skills of a number of local contractors and craftsmen.

On 6th October 2019 the upper floor was transported to Irlam Station where it was lowered and secured onto the re-constructed lower floor, which had been assembled on a new concrete foundation.  The Signal Box immediately looked at home at Irlam Station, despite more work being needed to bring it to completion. 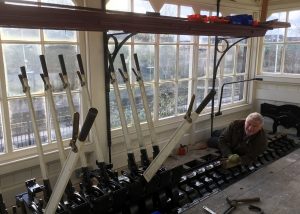 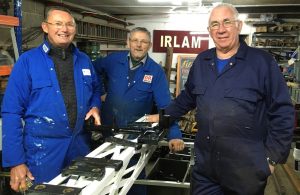 Whilst the Signal Box shell underwent further restoration all the mechanical components were carefully and skillfully refurbished and painted thanks to the endless hours of time and commitment given by HDT Chairman and engineer Neil McArthur and Friends of Irlam Station volunteers Ian Taylor, Paul Heslop and Ian Carter.

Neil McArthur said: “The amount of work involved in bringing this to fruition was huge and could not have been achieved without the enthusiasm and skills of volunteers who have given their time freely to support this wonderful project.”

Once the shell was completed, work began on reassembling and installing the original 32 lever frame, a labour-intensive task that required great attention to detail, as well as engineering experience. With levers and other working parts finally installed, instruments and artefacts were then added to the upper and lower floors to give the Signal Box that ‘lived in’ feeling! 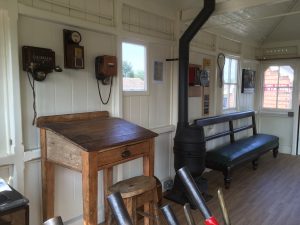 Having survived its long journey from Yorkshire and its extensive restoration, the Signal Box finally opened to the public on the 27th August 2020.

Along with the adjoining Signal Yard, the Signal Box now forms a magnificent museum and added heritage attraction, as well as a wonderful reminder of Irlam Station’s  bygone days.