Fancy a bit of cycling in a close urban and rural setting? Then Irlam and Cadishead is the place for you!

The first phase of the Irlam and Cadishead Cycle Network was launched in April by none other than Olympic Gold Medallist Chris Boardman MBE. The network provides a new route system, with aspirations to link with the National Cycle Network – improving connectivity with other areas. 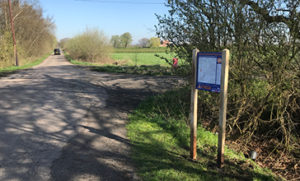 Based on the Dutch cycling model, the aim was to introduce a system that provides flexibility to tailor each route to the riders’ ability, through the use of waypoint and directional signage.

The waypoints will also allow the route to be altered during a ride, either extending or shortening the journey depending on how the rider feels, as well as taking in different points of interest, or stopping for a bite to eat or to use the facilities.

There are currently waypoint signs and posts in the following locations:

Alongside the waypoint and posts, we also have 2 informational signs located at Irlam Leisure Centre and Irlam Fire Station.

The network features a variety of terrains: on-road; existing pathways; and trunk routes. Each cycleway is detailed by category on the signage and categorised further into ‘satisfactory’ routes and those that need further work. This enables the rider to plan their route based on specific terrain.

The map also shows sites of interest on route, or facilities such as toilets and refreshments, which will help to make your journey as pleasurable as possible.

If you decide to take a ride on the Irlam and Cadishead Network, don’t forget to take some photos and share them with us on Facebookand Twitter, using #ICCycleway

It is hoped that the first part of the Irlam and Cadishead Cycle Network can be expanded to form a circa 50km distance between the National Cycle Network routes 55 and 62, including the expanse of Chat Moss. Watch this space….

For more information on led rides coming up across the area, please keep in touch with us on Facebook and also check our page on the Cycle UKwebsite.

How To Find Us